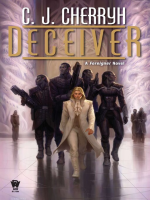 Description
The eleventh novel in Cherryh’s Foreigner space opera series, a groundbreaking tale of first contact and its consequences…
The civil war among the alien atevi has ended and Tabini-aiji, the ruler of the Western Association, has returned to power. Bren Cameron, Tabini's human paidhi, decides to return to his recovered home on the coast, but when Tabini's son Cajeiri flees his responsibilities to join Bren, Tabini sends the boy's great-grandmother, Ilisidi, to find him.
Najida, Bren's coastal home, is no longer the safe haven it once was. For a neighbor's estate—the ancestral home of Lord Geigi, a close associate of Bren's—has been left without strong leadership. Lord Geigi now resides on the atevi space station, and in his absence, rebel clans have infiltrated his home. When these rebels attack Bren's home, the paidhi has no choice but to recall Lord Geigi from space. With Lord Geigi, Ilisidi, Bren, and Cajeiri all under one roof, they pose an irresistible target for the enemy. Can these four powerful individuals overcome their adversaries and end this guerilla war that is the last vestige of revolution?
The long-running Foreigner series can also be enjoyed by more casual genre readers in sub-trilogy installments. Deceiver is the 11th Foreigner novel, and the 2nd book in the fourth subtrilogy.
Also in This Series

Note! Citation formats are based on standards as of July 2022. Citations contain only title, author, edition, publisher, and year published. Citations should be used as a guideline and should be double checked for accuracy.
Copy Details
Staff View
Grouped Work ID:
ddcf2ba0-da4b-3627-95b3-3aa7bdb248db
Go To Grouped Work